Cherries in the Snow, quite literally 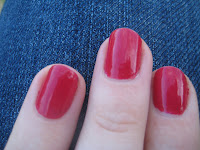 I was in CVS a few months ago with my sister looking at the Revlon lipsticks and trying to decide which color to get. Being the red-lover that she is, my sister told me to buy Cherries in the Snow. I did. 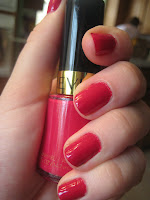 It's really quite alarming on my pale, pale skin tone, but it's fun to wear anyways. I thought the color was really pretty and would be awesome as a nail polish so I was very happy to find out that it was, in fact, a nail polish as well.
I'd describe this color as a very creamy red creme. But it's an odd red. I was trying to think of a word to describe the color and all I could come up with was raspberry. In some lights it looks like a dark bright pink (I don't want to say fuschia or magenta, it's redder than that) and in others it is a normal bright red. I tried to capture that quality in the two pictures above. Hopefully you'll see what I'm talking about so I don't sound like an idiot.
My problem with this polish is it's chippiness. I applied this on Friday and I had 2 chips yesterday. And it's not like I didn't use a top coat ... I used Seche Vite (which is pretty much the Holy Grail of top coats)! I wasn't working either, which is one thing that often gives me chips. Shelfing books is hard on your nails, weird as it sounds. Anyways, my consensus on Revlon Cherries in the Snow is that it is a fun bright color but doesn't wear well.
p.s. I forgot to explain the post title. I'm so pale that the effect of this bright nail polish against my white skin looks like the name of the polish. ;)
Posted by Faith at 4:10 PM