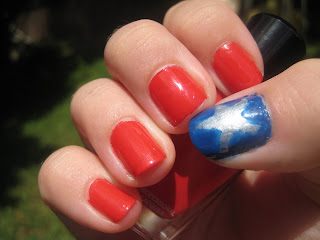 Here is my sloppy attempt at a festive 4th of July manicure. ;)
I used Zoya America (felt like I had to use a polish named America! :)) for the red, Essie Mesmerize for the blue, and Zoya Ginessa as the white.
I had originally wanted to use Ginessa to make white french tips (on the red fingers) as well, but decided that it would look trashy. After I made the star on my thumbs, I decided it would have looked better just to leave it red and blue. I think it looks a little campy. O well!
Here's a close-up of my dreadful, dreadful job on the star. Keep in mind that this is the one that turned out well! :O 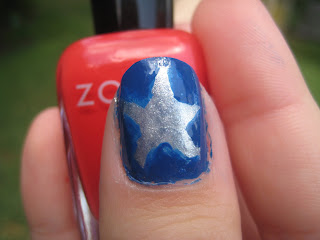 It is dang hard to make a star without using nail art brush! Zoya's brushes are especially squat ... it probly wasn't too smart to use Ginessa, but I wanted the sparkly look. It ended up looking more like silver than white though.

This is my last post before I leave for Colorado tomorrow. I've got a dumb consultation with an oral surgeon at 8:30 am, and we'll leave directly after that. Don't even ask, it's been very complicated and involves getting my wisdom teeth out before school starts. Anyway, we're driving. It's a 17 or 18 hr drive, so we'll get there noonish on Tuesday. My aunt owns a condo on Beaver Creek mountain (right next to Vail, if you know where that is), and she lets us stay up there every year. This year they'll be up there for a week with us, as well as my grandparents, and then we'll get the condo to ourselves for a week. Very nice. :) It is simply lovely up there and we are so looking forward to the cool weather. This was the hottest June in recorded history for Houston ... it has been 100+ every day for the past few weeks. Aghhh! 75 degrees is going to feel very good. :)
I'll be posting while I'm away, but probly not as much as normal. I've got some posts all arranged, about 2/week. O, and I'll be gone for 3 weeks, instead of the 2 that you've probably deduced. I'm leaving for St. Louis to stay with a friend for a week the day after we get back from Colorado. I'm a having a busy July!
So, until Colorado, see ya!
Posted by Faith at 4:45 PM