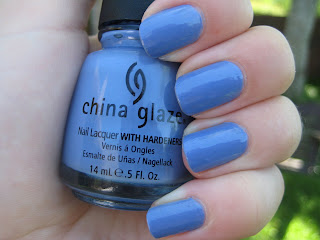 Here is Secret Peri-wink-le, from China Glaze's Operation Color collection of last Fall.
First off, the name irritates me. What's with all those dashes? I guess they're trying to be cute and emphasize the 'wink' part ... but that's just annoying.
The color's really nice though. :) It is, obviously, periwinkle. The picture above was taken in the shade, b/c I feel that that it shows the color more accurately than the pictures I had of it in the sun.
I think that SP has that same fantastic quality about it that OPI Done Out In Deco has which I love so much. I don't know what to call it - extra creamy? milky? Whatever is it, I really really like it. :)
The mixture of blue and purple in this periwinkle is just about perfect; not too blue, not too purple. Granted, in some lights it looks bluer or purpler than others. Here's a picture of it in dapply sun to show y'all kind of what I'm talking about. 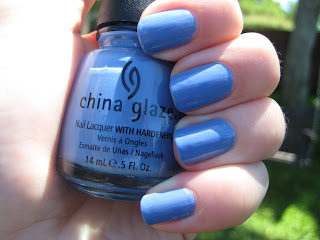 Can you see it?
I used 3 coats to try and even out some streakiness. It was still a bit streaky after the 3 coats though. I don't know if that's a problem with the polish or a problem with my application skills. But even with the streakiness, I'd say that this is definately a very pretty color. :)